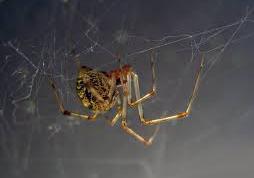 BROWN RECLUSE SPIDERS​
Brown recluse spiders have a characteristic dark brown violin marking on their back. These spiders often infest cedar shake roofs and spin irregular webs, which are used as a retreat.

Brown recluse spiders are nocturnal and eat other small bugs like cockroaches and crickets. These spiders spin irregular webs, which are not used for catching prey but rather as a retreat.

Brown recluse spiders often live outdoors where they are typically found around rocks, utility boxes and woodpiles. Indoors, brown recluses can be found in any undisturbed area, such as inside boxes, among papers, in seldom-used apparel and shoes, under furniture or in crevices of window moldings. Closets, attics, crawl spaces and basements are the most common brown recluse spider hiding spots. 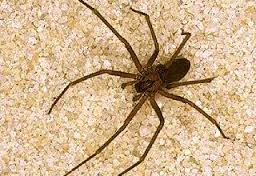 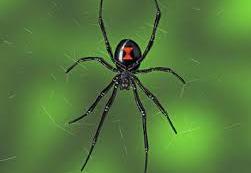 Black widow spiders are most recognized for the red hourglass shape under their abdomen. This spider gets its name from the popular belief that the female black widow spider eats the male after mating, although this rarely happens. Black widows are poisonous when ingested during the first 17 days of their life.

Black widows are active when the temperature is 70 degrees or higher, but they can survive lower temperatures with the right conditions. Black widow spiders spin irregular webs, which they build at night near ground level. Once complete, these spiders hang upside-down in their webs.

While male black widow spiders rarely bite, females are known to be aggressive and bite in defense, especially after laying, and when guarding eggs. Symptoms of a black widow spider bite include fever, increased blood pressure, sweating and nausea. Fatalities are unlikely, as long as proper medical treatment is sought in a timely manner. If you notice black widows or signs of infestation, contact a professional immediately for a proper course of black widow spider control.

Bugs Out Pest Control have been eliminating Spiders in New Jersey.  Residential, commercial, and industrial for over 10 years. They've helped thousands of residents and business owners locate and extinguish the source of the infestation before becoming widespread. Call today for a free consultation 973-228-7378.

The common house spider is usually the spider most often encountered indoors. It is a nuisance pest, probably more because of its webs than the spider itself. The house spider is found worldwide and is common throughout the United States and Canada.

Habits
The house spider randomly selects its web locations and creates a tangled web. If a web does not yield prey it is abandoned, another site is selected, and a new web is built.

Habitat
House spiders have a difficult time surviving in modern homes due to low humidity and fewer insects for food. They are more likely to prosper inside structures like garages, sheds, barns and warehouses. Outside, these domestic spiders are often around windows and under eaves, especially near light sources that attract prey.

Threats
Common house spiders are nuisance pests, but they pose no threats to humans.